GMAT Percentiles: What is a Good GMAT Score?

You may have a decent understanding of what to expect on the Graduate Management Admission Test (GMAT ) and its importance in the business school admissions process, but do you know the average scores and GMAT percentiles for your target business schools? Do you wonder, “What is a good GMAT score or score range I should aim for?”

In this post, I’ll break down what you need to know about GMAT scores and percentiles. After reading, you will have determined your goal score range so you can then move on to developing an appropriate study plan and selecting a GMAT prep course.

Let’s start by taking a look at the GMAT score chart, which illustrates how your scaled scores on the Quantitative and Verbal Reasoning sections translate to your total score. Keep in mind that this chart changes over time, and we’ve included the most recently available data (October 2020). For example, it has become more challenging to achieve a 780, 790, or 800 GMAT score in recent years, with near perfect GMAT scores now requiring higher scaled section scores. 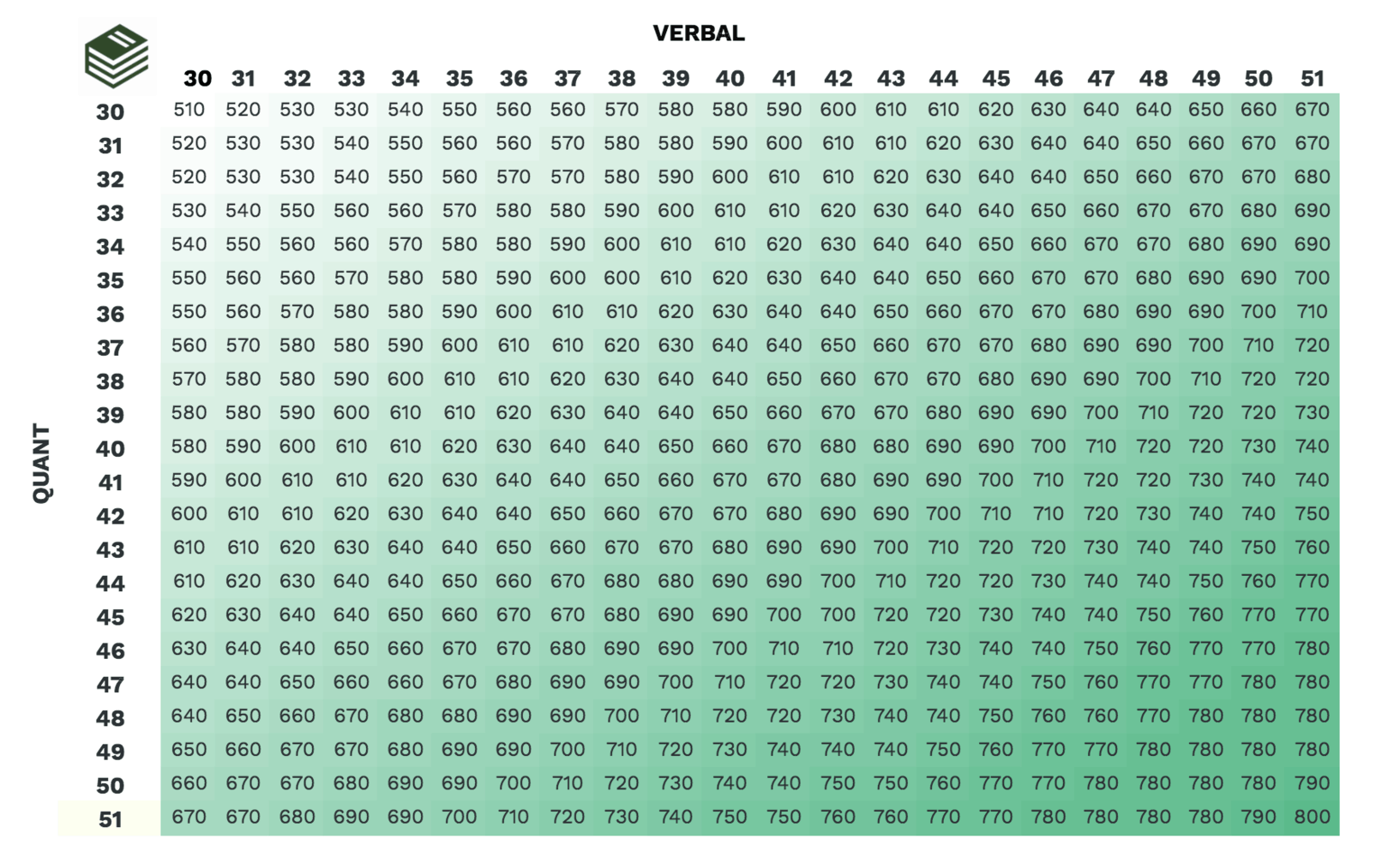 Total GMAT scores range from 200-800 and are reported in intervals of 10. Note, the standard error of measurement is 30-40 points! Basically, this means your “true” GMAT score, the score that reflects your knowledge and abilities, may be up to 30 to 40 points higher or lower than your reported score. When planning your application timeline, keep in mind that you may want to take the GMAT more than once, and perhaps up to three times, to increase your chances of receiving your “true” score.

What is a Good GMAT Score?

The average GMAT score is 564.84 according to the most recently published data from GMAC. Note, the GMAT average score sits at approximately the 42nd to 43rd percentile of the distribution (so below the median GMAT score of about 590). An average score (or below a 600 GMAT score) will likely limit the number of business schools where you’ll be competitive for admission. Many students take the GMAT more than once, and it’s common for students in this score range to see a meaningful score improvement on their second attempt with improved study and diligent practice methods.

A 650 GMAT score will place you at the 73rd percentile while a 670 GMAT score will earn you an 80th percentile ranking. This GMAT score range (650 t0 670) is generally considered to be a good starting point for a high GMAT score. While a score in this range won’t help your chances of getting into a top 25 MBA program, it won’t necessarily exclude you either, particularly if other components of your application include stellar work experience, a high GPA, or strong recommendations and essays. However, if you’re not wed to the idea of attending a top 25 program, the following schools have median GMAT scores around this range: Notre Dame (Mendoza), Vanderbilt (Owen), Texas A&M (Mays), Arizona State (Carey), and Indiana (Kelley) – all of which have well regarded MBA programs. 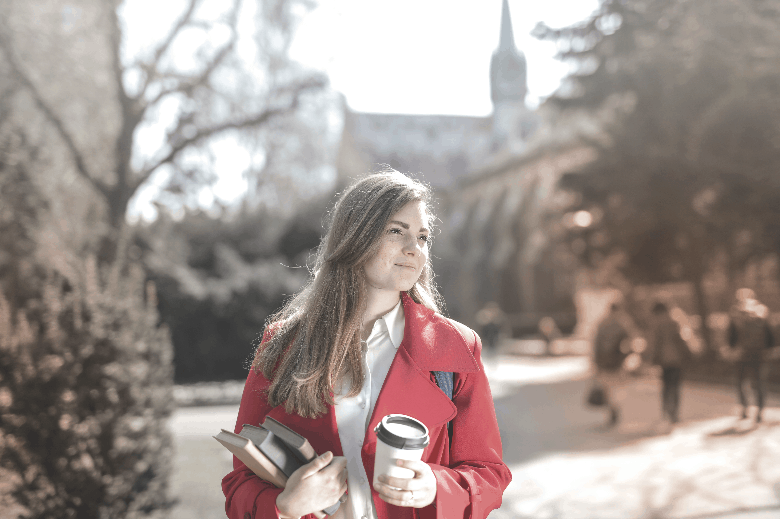 Ask any GMAT prep course instructor, “What is the most common goal score among students?”, and they will tell you that every student says they want a GMAT score of 700 or higher. Of course, not all of these students can score at the 88th percentile (700 GMAT score), nor do they all need to score at that high of a level. Nonetheless, applicants who are set on attending a top 20 business school and want to increase their chances of admission should target a 700 GMAT score or higher. Applicants interested in merit scholarships at top 20 schools should also target a score of 700 or higher. U.S. MBA programs with median GMAT scores in this range include UNC (Kenan-Flagler), Cornell (Johnson), Duke (Fuqua), USC (Marshall), and Virginia (Darden).

A 720 GMAT score will place you at the 94th percentile and within range of the top MBA programs in the world. For example, in their most recently admitted classes, Harvard Business School, Wharton (UPenn), University of Chicago, and Stanford Business School all had a median GMAT score of 730 (technically, Stanford only released their average GMAT score, which is 733). A 740 GMAT score (97th percentile) will place you above the average GMAT score of all MBA programs. Scoring at the 99th percentile (760 GMAT score and above) may help you secure merit scholarships at the M7 business schools assuming you have an equally well-rounded application.

For your reference, I’ve included copies of the GMAT total score, Verbal Reasoning, and Quantitative Reasoning percentile charts below. Notice that high Verbal Reasoning scores “count” for slightly more than high Quantitative Reasoning scores. This is due to an asymmetry in the GMAT test-taking population. Non-U.S. students generally excel on the quantitative section and struggle on the verbal. So, if you are more of a poet than a quant, know that there is a significant opportunity for you to increase your total GMAT score by acing the verbal section.

We’ve developed a general sense of GMAT score percentiles from some of the common score benchmarks above. Next, we need to determine our target GMAT score range based on the business school programs we’re interested in attending. Generally speaking, you should aim for a score at or slightly above the median (or average) GMAT score of your target school to increase your chance of admission.

Of course, don’t forget to take into account the strengths and weaknesses of your other application components such as your GPA, quality of recommendations, work experience, and personal statement. Also, a high GMAT will likely go further in correcting a low GPA than vice versa. In other words, don’t expect a high GPA to mask a low GMAT score, particularly at competitive schools.

Now, it’s time to dive into the data! Let’s take a look at GMAT scores for the top business schools and other notable MBA programs in the table below. Note, some schools report median GMAT scores while others report averages. If a school reported both, we used the median. Let us know in the comments section if there are any other programs you’d like to see added to this list.

Similar to how the GRE writing score is viewed, admissions officers typically judge your GMAT Analytical Writing Assessment (AWA) score on a “threshold” basis. A very low score could hurt your chances of admission, but a very high GMAT essay score won’t typically count for anything more than a check in the box (admissions officers are far more concerned with your composite GMAT score, which does not include the AWA score). The AWA is scored on a scale of 0 to 6 with half-point increments. The GMAC score guide makes the following distinctions:

According to the most recently available data, the average GMAT AWA score is a 4.45. A writing score of 5.5 places one just above the 80th percentile (81st percentile). Given the distribution of scores, it’s likely that a score below a 4 could signal a concern. That being said, with a little practice and preparation, you can develop a GMAT essay template that will give you the structure and confidence needed to write an above average essay come exam day. Also, if you are targeting some of the top 10 business schools, you’ll likely need to aim for at least a 5.5 so that every section of your GMAT is at least above the 80th percentile. 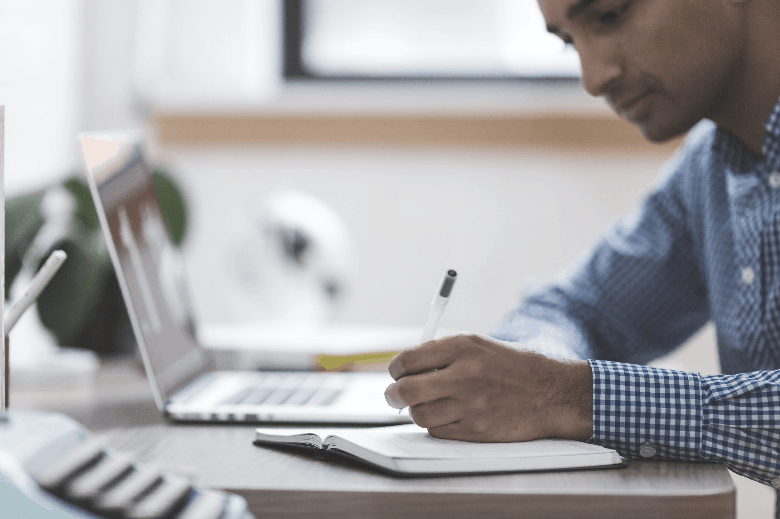 How Long are GMAT Scores Valid?

A GMAT score is valid for five years following your exam date. However, a GMAT score will last in your account for up to ten years. You may access them via a special score report request (with a fee of $28). Note, scores over ten years old are not available in your account.

How Long Does it Take to Get GMAT Scores?

How Long Does it Take to Send GMAT Scores?

Similar to the timeline for receiving your own official GMAT score report, the schools you selected on exam day (up to five) will receive your official score report within 20 calendar days of your exam. However, if you wait until after test day to send your scores (or if you need to send scores to more than five schools), it will cost $28 per school to send GMAT scores.

While it may seem obvious, it’s important to keep in mind that you can’t send your score reports via your online account until after you receive your official scores. For example, let’s say you would like to apply to seven business schools prior to their respective first round deadlines. The deadlines for those schools are within 35 days. Although you can elect up to five schools on test day, you will have to wait until after your official scores are available to then send your scores to the sixth school. Remember, it may take 20 calendar days for your GMAT scores to be sent. Thus, it could take up to 40 days in total for some schools to receive your GMAT score report (20 days for you to get your official score plus 20 days for the score to be sent after your request). Because of this, I recommend students make their final GMAT attempt no later than two months prior to an application deadline (and preferably sooner).

How to Predict Your GMAT Score?

Naturally, it’s not easy to predict what GMAT score you will earn prior to the exam. That being said, the best way to predict your GMAT score is by taking multiple official GMAT practice tests under near exam-like conditions (perhaps at a cramped desk). Most GMAT tutors recommend taking a minimum of five GMAT practice exams for those who would like to achieve close to their full potential; however, many top-scoring students frequently report taking closer to eight. So, to predict your GMAT score, take the average of your most recent official GMAT practice tests then add and subtract twenty points to determine your probably GMAT score range.

How to Cancel Your GMAT Score?

Students may cancel their GMAT scores on test day or within 72 hours (three days) of completing their exam. Students must elect to accept their score following the exam (i.e. students will have two minutes to either accept or cancel their scores). If no option is chosen before the two minutes is up, the score will be automatically canceled. While some students may be tempted to cancel their scores on test day, I recommend waiting a day to mull the decision over (this is especially important if you are close to your goal score range). If after appropriate consideration you wish to cancel your score, simply log into your mba.com account and click on the “cancel score” prompt. If you do not see the option to cancel in your account, understand that it may take up to 24 hours to appear. Additionally, there is a score cancellation fee ($25 in the U.S.) for those who choose to cancel their GMAT scores after having left the test center.

Please confirm deletion. There is no undo!